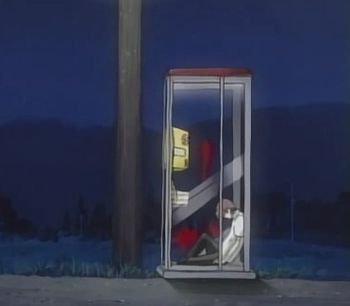 If you would like to continue your call, please deposit 25 cents.
"Yes. Will you accept a collect call from a Mr. Aaaaaaaaaa?"
— Operator, The Far Side
Advertisement:

A specific subtrope of the Doomed Appointment, Disconnected by Death is signaling the death of a character by the abrupt end of a phone call they are making.

The basic structure of this trope is that one character has information that they must get to another character (usually The Hero, or at least, one of the Good Guys). They make a phone call. They are killed after the phone is answered on the other end, but before they can pass along the information. There may be a Big "NO!" or scream for audible over the phone if the victim sees the killer.

Within this structure, the trope has visual and aural variants: the visual versions can use an old-style free-standing phone booth, a land-line telephone not in a phone booth, or a cell phone. The aural version has dial-tone, where the killer hangs up the phone, causing the hero to hear a dial tone, and open-line, where the killer doesn't hang up, and the Hero spends some time yelling "Hello! Hello?" before concluding "Something's happened." Rarely, the killer will get on the phone and give a Bond One-Liner about the murder or to mock the listener.

For extra points, the victim has said part but not all of his message (or even gasps a few words out as he dies), allowing the heroes to get a clue that will save the day later, but only after they rack their brains to get what the victim was trying to say. Even more bonus points if the informant turns and says "it's you!" before being offed.

Death Trope, so watch out for spoilers!

Alternative Title(s): Murdered In A Phone Booth, Murdered On The Phone