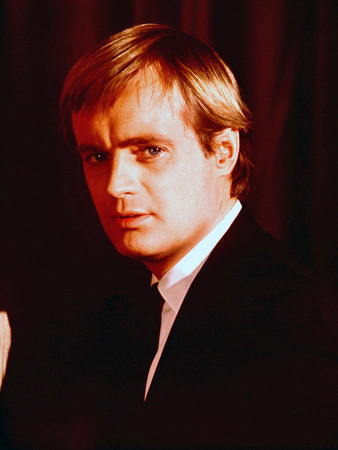 U.N.C.L.E. or N.C.I.S. - You just gotta love this guy!
"It’s interesting because I’ve done a few shows in my life that are still... 'extant' I think is the word. The Man from U.N.C.L.E. seems to be absolutely timeless and go on forever. The Outer Limits is another show.... Sapphire and Steel falls into that. And I think it’s because there is that element of 'cult'."
Advertisement:

David Keith McCallum (born 19 September, 1933 in Glasgow, Scotland) is a Scottish-born actor, musician, forensic science expert, and now author whose career has spanned more than six decades. Many of his acting roles have been in "genre" films and television, a few of his more famous roles are quite frankly iconic. His most famous 20th century role was that of Illya Kuryakin in The Man from U.N.C.L.E., but in the new millennium, he is equally or more well known as Dr Donald "Ducky" Mallard in NCIS.

Although his roles have been many and varied (he has worked on stage, television and films on at least three continents: Europe/UK, North America and Australasia), some common themes crop up from time to time. He once (or twice) joked that his tombstone would read "Here lies Illya Kuryakin" and not only did he reprise the role for the Reunion Show of The Man from U.N.C.L.E. in the 80s, but also when he guest-starred on The A-Team later that decade the character he played was a thinly disguised parody of Illya. Also his character in Sapphire and Steel was in some ways a supernatural version, being a coldly efficient transdimensional agent. Another theme is World War II Allied POWs intent on escaping, which describes his characters in The Great Escape and Colditz. And he is one of only five actors to have appeared in both the 1960s and 1990s versions of The Outer Limits.

His musical exploits are less well known, but also varied. He plays oboe and guitar, sings, composes and has been known to conduct the occasional orchestra. During the height of his fame with The Man from U.N.C.L.E., he wrote and played guitar on a duet he sang with Nancy Sinatra in one episode and also released four instrumental albums. His 1967 instrumental tune "The Edge" was famously sampled by Dr. Dre on his 2000 single "The Next Episode".

To say that he is a multi-talented veteran with a long and successful career might be considered something of an understatement.