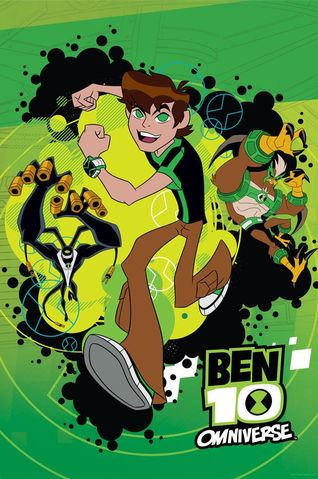 Changing into the creatures of the universe to fight evil all at the press of button!
"Ben 10! He's a kid and he wants to have fun, but when you need a superhero, he gets the job done!
Ben 10! With a device that he wears on his arm, he can change his shape and save the world from harm!
When trouble's taking place, He gets right in its face! Ben 10!
When lives are on the line, It's hero time! Ben 10!"
— Theme Song
Advertisement:

Ben 10: Omniverse is the fourth iteration of the Ben 10 franchise following Ultimate Alien.

A few months have passed since the events of Ultimate Alien. Earth has eventually been declared a free system, and the aliens now live freely amongst humans. Ben, now equipped with his new Omnitrix, is still working for the Plumbers. Eventually, Gwen decides to leave Belwood to go to college, and Kevin follows her. With Ben now alone, Max assigned him a new partner, a young Badass Normal alien plumber named Rook (much to Ben's dismay). As Ben must learn to cooperate with Rook, he has to face the arrival of Khyber, a mysterious alien hunter who set his sights on him.

Intended to conciliate the style of the original Ben 10 series with its two sequels, the series toned down the Darker and Edgier approach introduced by Dwayne McDuffie in Ben 10: Alien Force, instead going for a Denser and Wackier tone buoyed by the more stylized art of Derrick J. Wyatt (Transformers: Animated, Scooby-Doo! Mystery Incorporated) in addition to massive call backs to the original series (such as bringing back several old aliens and forgotten characters).

Concerning the plot, the show takes advantage of the Time Skip between the original series and Alien Force, using it to introduce new adventures that took place in the original series' era when Ben was eleven years old. These take the form of Whole Episode Flashbacks, smaller flashbacks that interweave with the present-day plot, and the occasional time travel shenanigan that has both eras of characters interacting; all which have the bonus of letting the writers create new villains, characters and events that have a connection to Ben's past.

The series concluded November 14, 2014, its final episodes airing at 6am on a weekday, and it is the last series of the franchise to use what is referred to by Cartoon Network as the "Classic Continuity". The following installment, Ben 10 (2016), would be a full Continuity Reboot that returns to the summer road trip premise of the original series.

for browsers as well as mobile platforms like Android and iOS. Some games like Ben 10: Up to Speed have more than 50000 downloads on Google Play Store.