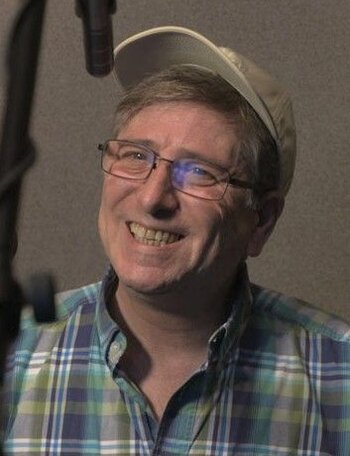 “That’s truly all I have really wanted to do - be a part of something great, something that makes a difference in somebody’s life. And as I realized early on, you know, cartoons, animated motion pictures and even bit parts, background characters in movie soundtracks can be so meaningful in people’s lives. I mean, it’s just stunning. And I mean, I apologize I cannot keep up with signing autographs or communicating fans who write me; but I get so many stories of just one little bit that I’ve done in a series or film or whatever, that’s made a huge difference in somebody’s life - and that’s what I do it for.”
— Source

Corey Gregg Weinberg (born August 3, 1955), better known as Corey Burton, is an American voice actor. He began his voice career at age 17, in an imitation performance of voice actor Hans Conreid for Disney. He studied radio acting with the legendary Daws Butler for four years, and went on to work with nearly all of the original Hollywood radio actors in classic-style radio dramas. He has also done numerous cartoon series for other networks, such as Cartoon Network.

Burton is an incredibly talented mimic and has voiced sound-alikes and original characters for over 50 Disney Storyteller records or games. His roles include:

In addition, Burton has done extensive voice work for Disney including feature animations, theme parks, interactive sections of the company, and attractions at the Disneyland Resort, Walt Disney World Resort, and Tokyo Disney Resort. In fact, regarding the Floridian resort, he was also one of two narrators in a 1990s PC application called The Walt Disney World Explorer, which was a Point-and-Click "edutainment" title that had slideshows, videos, audio descriptions and even a trivia side game that was all about Disney World. Over at the Californian resort, he provides the announcements for the Mickey and Friends Tram. He also provides the "Feature Presentation" voice on numerous Disney videos. He also overdubbed the voice of Fantasia MC Deems Taylor for the 2000 60th Anniversary Edition DVD release onwards, as Taylor's original soundtrack had deteriorated.

Burton is also known to Star Wars fans as the audio double for Christopher Lee as Count Dooku in Star Wars: Clone Wars and several Star Wars video games (likewise for Kingdom Hearts Re:Chain of Memories, doubling over for Lee as DiZ from Kingdom Hearts II and Birth By Sleep). He appeared as Ziro the Hutt and General Lothsome in the Star Wars: The Clone Wars pilot film and also appeared as Captain Mar Tuuk and Cad Bane and reprised his roles as Count Dooku, Ziro The Hutt, and General Lothsome in the series, reprising his role as Cad Bane in the character's first live-action appearance in The Book of Boba Fett. When Sir Christopher Lee was brought in to record for the Star Wars: The Clone Wars pilot film, he was so impressed with Corey's impersonation of him that he wondered why he even needed to record for the pilot film. He even used his Lee impression for a few other roles, including Hugo Strange and another Lee character in the Marvel Universe shows, Dracula.

Also well-known to the Transformers universe as the voice of Shockwave, Sunstreaker, Brawn and Spike Witwicky in The Transformers . Almost a quarter of a century later, he reprised the role of Shockwave and Spike, as well as assuming the roles of Megatron, Ratchet, and Ironhide in Transformers: Animated. He was considered by Michael Bay to reprise his role as Shockwave for Transformers: Dark of the Moon, but Burton ultimately declined, citing a busy schedule and a general disinterest in blockbusters. note David Warner was also considered for Shockwave, who was actually Burton's inspiration for the original incarnation of the character, but ultimately, the role would've been something of a waste for both Burton and Warner, since Shockwave is actually a Red Herring for the true Big Bad of the film, despite being heavily toted as such during promotion.

He's also played dozens of characters on Adventures in Odyssey, his most frequent as Edwin's assistant Walter Shakespeare, and is currently one of the main voices for Robert Rodriguez's new El Rey Network.

Burton is a sound engineering enthusiast, and is an expert with microphones and recording equipment. He has Asperger Syndrome, and tends to avoid public appearances unless in a controlled environment.