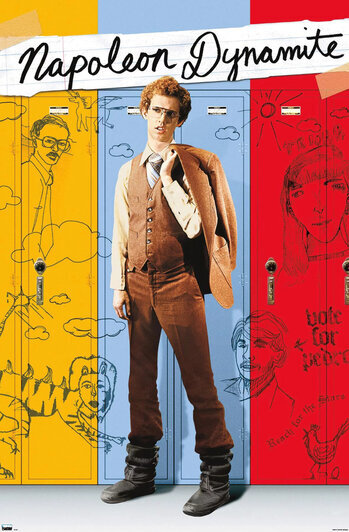 Kid on Bus: What are you gonna do today, Napoleon?
Napoleon: Whatever I feel like I wanna do, gosh!
— Opening lines of the movienote He's not kidding.
Advertisement:

Napoleon Dynamite is a 2004 independent movie directed by Jared Hess and distributed by Fox Searchlight Pictures, Paramount Pictures, and MTV Films. It's a subdued and sweet little cult film, telling the story of a trio of friends and their attempts to overcome their status as social outcasts.

The film became legendary for making audiences laugh at the Sundance Film Festival, and subsequently became a huge hit with the teenage crowd of the 2000s, resulting in a cult following similar to teen movies of the 1980s. The atmosphere of Napoleon Dynamite is peculiar, with downplayed humor, quiet absurdism, largely unrelatable and awkward characters, and deliberately stilted dialogue — but at the film's core, it's a very intelligent and optimistic portrayal of high school life.

The eponymous Napoleon is not just a nerd — he's a real genuine dork, not particularly skilled at anything, angry at the world, incapable of even the most basic friendly conversation, and a mouth-breather to boot. He has exactly one facial expression. People don't like him and he doesn't like people.

The film has its setups and payoffs, but is very much a Random Events Plot: anything that would be a big deal in most high school films is very deliberately downplayed. Early on, Napoleon meets new student Pedro, and the two of them begin searching for dates for the upcoming school dance, where Pedro sees a flyer for the school election and decides to run for class president with Napoleon as his campaign manager. A running theme is a mild quasi-romance between Napoleon and Deb, a girl who is even less socially capable than Napoleon.

Additionally, Napoleon and his unemployed brother Kip are forced to host their Uncle Rico, a former high school football player trying to find a way to travel back to 1982 so he can win the big game and become an NFL star. Kip, meanwhile, joins in Uncle Rico's various get-rich-quick schemes to be able to meet up with LaFawnduh, a girl from Detroit he talks to in an online chat room on dialup.

The movie aims to be as deadpan awkward as possible, and the results have caused quite a bit of Hype Backlash for those who expected a regular teen comedy. It was the breakout role of Jon Heder, who plays the title character and has gone on to mainstream roles alongside stars like Will Ferrell and Billy Bob Thornton. The filmmakers themselves, Idaho natives, went on to make Nacho Libre with Jack Black.

The movie is often considered an "honorary" Mormon film. Despite containing no explicitly Mormon themes, most of the production team was LDS and recently graduated from BYU, the film is squeaky-clean to the point of it being part of the humor, and many of the jokes make a lot more sense if one has a familiarity with Mormon culture.

In 2012, an Animated Adaptation aired on Fox, lasting only six episodes; the trope page for the cartoon series can be found here.