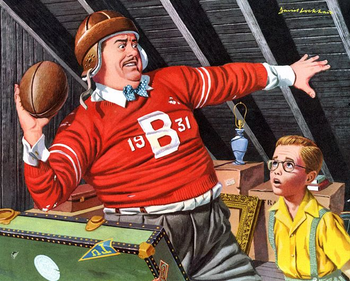 Joe: You're Norma Desmond! You used to be in silent pictures; you used to be big!
Norma: I am big! It's the pictures that got small!
— Sunset Boulevard
Advertisement:

You have a Crowning Moment of Awesome in your past. It haunts you. Either your life went downhill, or you continually fail to match or top that moment, or you try coasting on that glory for the rest of your life.

One of the classic examples is the stereotypical high school jock who won the big game, and spends the rest of his life in an unsatisfying job. Either he did not make it in college, or he is treated as a rank-and-file Office Drone in the business world. Later he may inform his miserable children that these are the Best Years of Your Life.

Compare I Coulda Been a Contender!, Nostalgia Filter (when a character looks back on the past with rose-tinted glasses), Tough Act to Follow, White-Dwarf Starlet, Jaded Washout (spends his time wishing he was still back there), Loser Protagonist, and Trade Your Passion for Glory.

When a character had to leave a dangerous life for a more mundane one, and spends it longing for his glory days, he is in love with being In Harm's Way. If the character is using her children as a vector through which to either achieve what she never did or relive her glory days (instead of letting the kids be who they are), she may become an Education Mama or a Stage Mom. See also Jock Dad, Nerd Son.

Contrast While You Were in Diapers.

open/close all folders
Anime and Manga
Comic Books
Fan Works
Films — Animated
Films — Live-Action
Literature
Live-Action TV
Music
Mythology
Sports
Many, many sports teams or cities have this trope, particularly in sports with promotion and relegation where messing up can well mean the team getting passed down to the third or fourth division with countless former champions never making it back. There is also a surprising number of washed up former pro sports stars in real life, many of them nursing the effects of one too many injuries and some broke because they never learned to handle money or never made as much as you'd think to begin with.
Tabletop Games
Theatre
Video Games
Web Comics
Web Original
Western Animation
Real Life