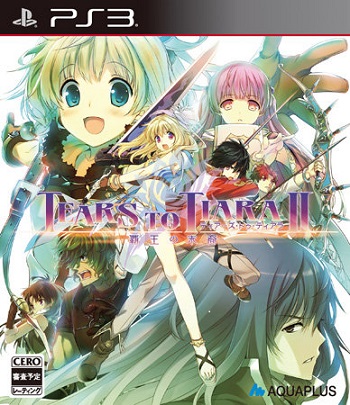 "I'm your goddess Astarte."
— Tarte, Once Per Cutscene
The Story of the Lost Goddess and the Overlord
Advertisement:

Atlus released the English localization in North America on October 14th, 2014. It was released in Europe by NIS America on November 7th.

The period is some time in the near future after the events of the first game. In the town of Tamar in central Hispania, the Canaanites are being oppressed by the Divine Empire. They are heavily taxed, treated as slaves, and forced to use stones from their temple to build a new church to the Almighty Watos. All because the previous governor of Hispania, Hasdrubal Barca, had revolted against the empire seven years ago and failed.

Hamilcar "Hamil" Barca, son of Hasdrubal, is now leader of the Canaanites. However he is dumb, has no skills in magic or sword, and willingly allows imperial soldiers to beat him and laugh at him. All of the Canaanites are disappointed at their leader, and the Divine Empire thinks he's a joke. Behind the scenes, The Barca Faction are planning a rebellion. Unbeknownst to everyone, Hamil is an incredibly cunning youth. He wishes to prevent a rebellion at all costs, and does it by playing dumb. He hears the cry of a girl and finds her somehow having tangled her foot underneath the roots of a tree. She calls herself the goddess of harvest and war Astarte, but is unable to use any magic, to her surprise.

Hamil realizes a rebellion is planned, and on the way home that day harshly gets Tarte to leave town to prevent her being persecuted by The Divine Order for calling herself a goddess. He is then approached by Zaras who plan on using him to bait out and destroy the Barcid party. Hamil continues to play dumb and goes along with Zaras' plans in order to prevent the destruction of war falling on Hispania.

At the festival, Zaras unveils a surprise. Tarte has been captured and is about to be burnt at the stake for calling herself a goddess. For seven years, Hamil has prepared for this Ba'al festival. He is prepared to die and sacrifice the entire Barca Faction if it meant preventing a rebellion. But with Tarte unconscious, about to be burnt alive before him, Hamil breaks the facade, gives into his anger, and summons forth the God of War Melqart.

The rebellion has begun.