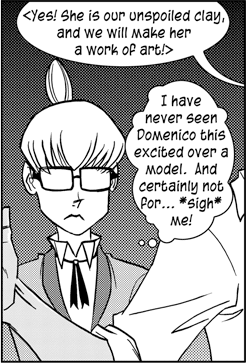 When the The Hero or the Big Bad has an underling, potentially The Dragon, an adjutant/secretary or a Paid Harem, it's often the case that she (though flipped genders — or even the same gender — aren't unheard of) goes beyond being loyal and both idolizes and loves him. Her declarations of love will go unrequited because, when he's not Oblivious to Love, he will at best feel no (romantic) affection for her. A hero may try to let her down gently, a callous boss will say so outright, and the cruel one will play Master of the Mixed Message to avoid telling her and string her along. Even if he says he doesn't love her, she'll interpret it as needing to work hard to earn said love.

If her boss is enamored with another woman, she will be positively livid with jealousy and may attempt sabotage or even to murder her rival. If he finds out he will severely punish or kill her. In fact, as minions go she will frequently be the target of You Have Failed Me, You Have Outlived Your Usefulness, and general abuse by her boss when he needs to let off steam. This is played as a sort of Kick the Dog; while she's no dove, the mistreatment's undertones of domestic abuse will make most audiences uncomfortable.

This character can be Played for Laughs and written as a one-note case of Mad Love, who will never waver from her devotion or allow rejection to dampen her Perkiness. More positively, she can be Played for Drama as a misguided and intelligent woman who, once she sees how little she's cared for (abuse optional), is quick to reassess her (romantic) loyalties. Of course, she can be played for tragedy by getting betrayed or even killed by the man she loves, without ever getting a chance to learn from her mistakes. Should the hero kill their boss (or the boss blatantly betray her), expect Woman Scorned to follow.

Sister Trope and contrast to Girl Friday, who is an aide or secretary to the hero (UST optional). Compare Subordinate Excuse, when the underling is using the position to be near their object of affection while avoiding rejection.