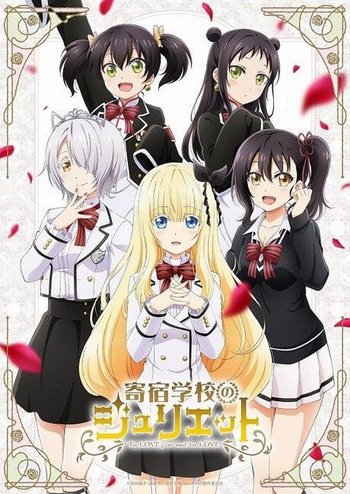 To LOVE, or not to LOVE
Advertisement:

Boarding School Juliet, also known by its Japanese title Kishuku Gakkou no Juliet, is a romantic comedy manga by Yousuke Kaneda. It is based on the popular William Shakespeare play, Romeo and Juliet. The series started serialization in Shōnen Magazine in 2015 note after a similar oneshot by the author was positively received and was released in English by Kodansha. The manga concluded on September 4th, 2019.

The Black Dogs of Towa and the White Cats of Principality of the West, although they have warred for generations, have much in common: pride, fiercely martial spirits, and Dahlia Academy. This elite boarding school sits on the countries' border, teaching their children both academia and patriotism. No one has ever wanted to end the war, or ever tried...

Until Romio Inuzuka and Juliet Persia fall in love. Now, these teenagers must navigate politics and the usual romcom misunderstandings as they try to keep their relationship secret.

An anime adaptation aired on October 2018, animated by Liden Films.

See also Romeo X Juliet, another series inspired by Romeo and Juliet, but much more on the dramatic side and Recycled IN SPACE!.

This manga includes the following tropes: