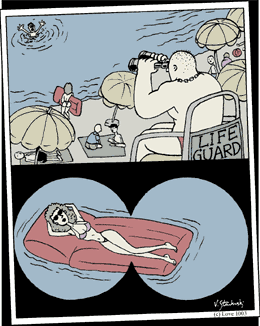 Used with permission.
Mannion: She's sure taking a long time in that shower!
Wiley: Yeah, honey, come on over here by the window!
Insignia: Don't you do it, honey! You take your own sweet time!
Stefanowski: There's another one over by the washbasin—taking a shampoo.
Insignia: Yeah. But why the hell don't she take her bathrobe off! That's a stupid damn way to take a shampoo!
— Mister Roberts
Advertisement:

The use of binoculars or telescopes for prurient, non-ornithological purposes. Typically consists of men ogling women who are busy getting undressed, taking a shower or having sex.

Marty discovers one of the pastimes his father had as a teenager.

Marty discovers one of the pastimes his father had as a teenager.