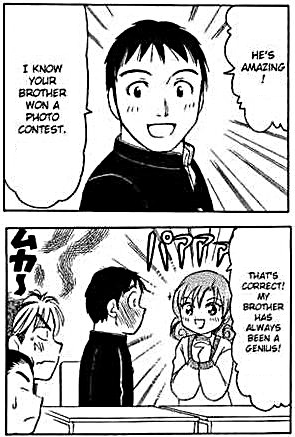 My big brother is the best, and I refuse to believe he has any flaws!

Sometimes a younger sibling just adores their elder sibling. After all they are more mature, and usually physically taller too, and able to do a lot of cool things like adults, but are also closer to your age and willing to do fun things with you and play with you. They protect you too. Why wouldn't you just agree with everything they tell you? Often will also happen when said older sibling takes the place of the parent.

Most commonly occurs with siblings of the same gender, but it can happen the other way around too. In addition, in anime, this attitude can often be emphasized by the appeal of Onee-sama or Onii-sama, since such a form is very formal and old-fashioned, which only emphasizes the degree of respect.

Though rare, it can turn up in Real Life as well.