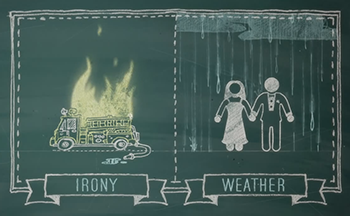 Irony is not coincidence... Alanis.
"The use of words expressing something other than their literal intention! Now THAT... IS... irony!"
— Bender, Futurama
Advertisement:

A character wrongly declares some situation to be ironic, and another character corrects them.

Often, irony seems to be something just not everyone can grasp.

Compare to You Keep Using That Word and Sarcasm-Blind.

TT has a personal stake in this; if there's one thing the Strider boys are totally sincere about, it's irony.
Vriska: Define irony........ A bunch of idiots who don't have a chance against me!!!!!!!!
Karkat: THAT WAS NOT IRONIC AT ALL, VRISKA!

A woman describes a moronic scene as "ironic". Yui sets her straight.

A woman describes a moronic scene as "ironic". Yui sets her straight.