Literature / The Mark of the Lion 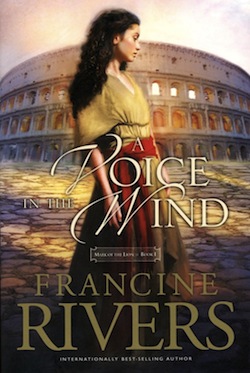 Hadassah, with an ominous backdrop.
Advertisement:

Trilogy of Christian Historical Fiction novels published in the 1990s by Francine Rivers. They are set mostly in Rome during the first Jewish-Roman War, circa A.D. 70.

The first two novels are A Voice in the Wind and An Echo in the Darkness. They form a cohesive story arc following the story of Hadassah, a young Judeo-Christian girl who is sold into slavery, and Marcus Valerian, a wealthy Roman aristocrat determined to get the most out of life. They slowly fall in love but are torn by their wildly different social classes and worldviews, since Hadassah is a steadfast, selfless Christian and Marcus is dedicated to the Roman philosophies of hedonism and paganism. The third novel, As Sure as the Dawn, focuses on Atretes, the high chief of a Germanic tribe who is captured and forced to be a gladiator, and is more like a spin-off than a direct continuation of the first two novels. The primary link between the first two novels and the third is Julia Valerian, Marcus’ hedonistic younger sister who, in her pursuit of control over her own life, strikes up an affair with Atretes.

Complex character arcs, historical and Biblical exposition, action, and intrigue all wind up to form a beautifully-crafted fictional testament to how Love Redeems.

These novels contain examples of the following tropes:

Alternative Title(s): The Mark Of The Lion Series