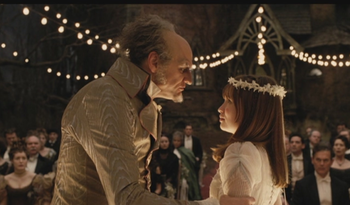 Don't worry, there's nothing creepy going on — he just wants to marry her so he can murder her and inherit her fortune!
"Hodel, oh Hodel,
Have I made a match for you!
He's handsome, he's young!
...alright, he's 62."
— Tzeitel mocking Yente, "Matchmaker, Matchmaker", Fiddler on the Roof

Out of all Arranged Marriage tropes, this one is particularly striking. It combines the Dirty Old Man trope with the trusting helplessness of a young girl, and is bound to raise all kinds of hackles in the audience. Today, it is generally considered an awful thing. However, there are cultures who consider a daughter to be the property of her parents, and believe that they have the right to give her away in marriage to whoever they choose. Sadly, this often goes hand in hand with the idea that a husband has the right to have sex with his wife, regardless of how she feels about it and regardless of how young she is.

A Sub-Trope of Arranged Marriage. Note that this trope only covers the marriage itself; Marital Rape License applies only to the same situations it would under normal circumstances (a simple lack of a Jail Bait Wait doesn't cut it).

Contrast Wife Husbandry and Jail Bait Wait, where the much older guy wants the child but waits until she's old enough. Compare May–December Romance and Age-Gap Romance, the less extreme (and more consensual) versions of this trope.

More information on The Other Wiki available here