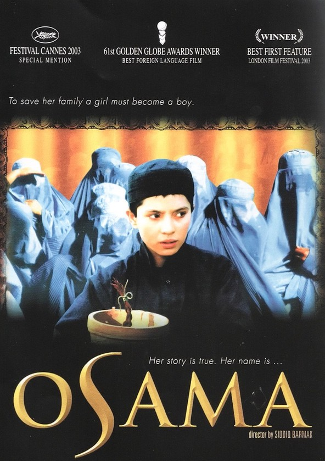 Osama (Persian: أسامة) is a 2003 film made in Afghanistan by Siddiq Barmak. It is about a young girl in Afghanistan under the Taliban who disguises herself as a boy, Osama, in order to support her family. It was the first film to be shot entirely in Afghanistan since 1996, when the Taliban regime banned the creation of all films. The film was an international co-production between companies in Afghanistan, The Netherlands, Japan, Ireland, and Iran.

To put it in troper vernacular, Osama is a real Tear Jerker that shows the effect the Taliban rule had on women, and how the absurd Double Standard often created impossible situations for them. Circumstances have left Osama's family without any male relatives to support them. When the Taliban close the hospital where they work, and enforce draconian restriction against women working or moving about freely, their choices are literally to endanger their daughter and break the law, or starve.

Not to be confused with Osama bin Laden. Although the use of his name is probably not an accident, the film makes no other reference to him.