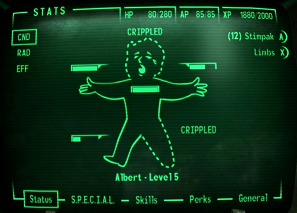 Some limbs work...but some don't.
Advertisement:

Subsystem Damage is the opposite of Critical Existence Failure. It is when individual body parts (or components of a vehicle) can be targeted or damaged, or when physical effects impede your character, such as limping or shaky aim.

Subtrope of Multiple Life Bars. See also Cognizant Limbs, for the Boss variety. Can sometimes result in a Shared Life-Meter depending on how the game chooses to display the damage. This can lead to Injured Vulnerability. Shows Damage is a visual-only variation of this. Compare Attack the Injury.