Film / Out of Time 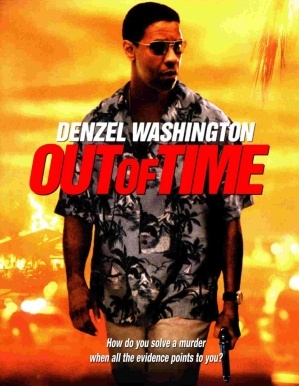 Out Of Time is a 2003 Neo-noir thriller that stars Denzel Washington, Sanaa Lathan, Eva Mendes, Dean Cain and John Billingsley.

Matthias "Matt" Whitlock (Washington) is a respected and competent Chief of Police in the Florida Keys town of Banyan Keys. Working alongside his soon-to-be ex-wife, Alex (Mendes), he then gets back in touch and begins seeing his high school sweetheart Ann Merai-Harrison (Lathan), who is in an unhappy marriage to her abusive husband, Chris. After being reacquainted with one another, Matt is horrified to learn that Ann has terminal cancer and in learning this, she bequeaths her life insurance policy of $450,000 on him by naming him the sole benefactor. While trying to help her get her affairs in order before her death, Matt is then shocked to discover that she and her husband have been killed in a house fire and even more shocked to realize that not only was it a double homicide, but that the evidence is gradually pointing to him as the suspect.