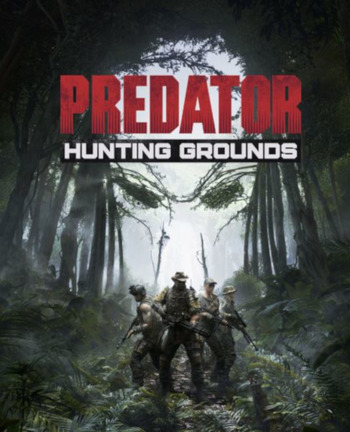 Stay frosty!
They travel impossible distances to hunt us, skin us, and mount us over some alien fireplace on another world. It would be disgusting if it weren't so familiar.
— Alan "Dutch" Schaefer
Advertisement:

Predator: Hunting Grounds is an Asymmetric Multiplayer game based on the Predator film franchise. It is developed by IllFonic, of Friday the 13th: The Game fame, and published by Sony Interactive Entertainment. It was released on PlayStation 4 and PC via the Epic Games Store on April 24th, 2020. Unlike the Friday the 13th game, Hunting Grounds is stated to be a canonical addition to the films set after the events of the fourth film.

The game pits a Fireteam of up to four players against one player who takes the role of the titular alien hunter. The Fireteam is tasked with completing various objectives, from collecting key items to clearing out enemy encampments, and escaping with their lives. The Predator, conversely, is tasked with hunting down the members of the Fireteam and claiming their trophies. The Predator has advantages in mobility, capable of leaping over vast distances and reaching areas humans can't, in addition to a variety of technological gadgets and weapons, from optical cloaking and thermal imaging to wrist-blades and the deadly Plasma Caster. The Fireteam, on the other hand, must leverage their numbers and weapons to drive off the Predator and complete their missions. Should the Predator find itself on the verge of death, they can attempt to finish off the Fireteam in one last-ditch effort by setting off their self-destruct device and wiping them out. If the Fireteam manages to kill the Predator before they can trigger their self-destruction, however, they can receive bonus rewards for protecting the alien's cadaver for the Other Worldly Life Forms Program.

A Prequel novel, Predator Stalking Shadows, was released in May 2020, that bridges the gap between the modern continuity and Predator 2.