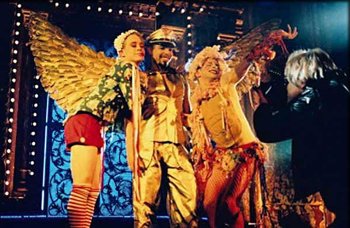 "I think it's so important to begin with a bang, don't you? Let 'em know something horrible is going to happen, and then — poof! We're suddenly elsewhere. Michael Alig's Blood Feast party. Just a quiet night out with a few friends..."
Advertisement:

Party Monster is a darkly comic 2003 film about the rise and fall of infamous club promoter Michael Alig. The film covers his partnership with fabulous and attention-seeking socialite James St. James, his success in the outrageous '90s club scene, and the ensuing downward spiral of outrageous behavior culminating in the murder and dismemberment of roommate and drug dealer Angel Melendez. The framing device is that years after the murder, James St. James has found success as a writer, and retells the events of his friendship with Michael over the course of an interview.

The film stars Macaulay Culkin as Michael Alig, Seth Green as James St. James, Dylan McDermott as Peter Gatien, Wilson Cruz as Angel Melendez, and Chloe Sevigny as Gitsie. The film was a critical and commercial failure at the time of its release, but has gone on to have a reasonable cult following.

Not to be confused with the 1998 "shockumentary" of the same name, and about the same individuals or the 1960 Halloween classic Mad Monster Party.