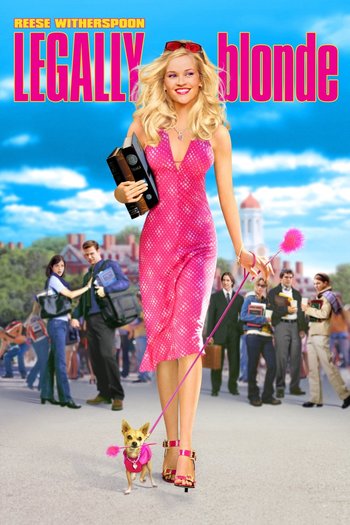 Who needs Atticus Finch when you have Abercrombie and Fitch?
Warner Huntington III: You got into Harvard Law?
Elle Woods: What, like it's hard?
Advertisement:

Life seems to be going swimmingly for sorority socialite Elle Woods. Homecoming queen, president of Delta Nu, and girlfriend to Warner Huntington III, Elle has no qualms with the way her life is heading, particularly as she suspects Warner is soon to pop the question. However, things take a turn when Warner dumps her on the night she thought he was going to propose. His reason? "If I'm going to be a politician, I need to marry a Jackie, not a Marilyn."

So Elle is dumped for being "not serious enough". However, she realizes the perfect way to get Warner back — by becoming a serious law student. So she applies to Harvard Law School and is accepted, both because her scores are near-perfect and because her hyper-feminine joie de vivre makes for a nice change. But this is only the beginning as she strives to prove her worth to Warner, her professors, her fellow students, and even herself, all while dressed in pink and with her chihuahua Bruiser by her side. And as she realizes that she's actually pretty damn good at the whole law thing, things much more important than Warner enter her life.

Based on the semi-autobiographical story of Amanda Brown, this 2001 film starred Reese Witherspoon in her major breakout role. There was a sequel and a spin-off made: Legally Blonde 2: Red, White & Blonde in 2003 and Legally Blondes in 2009. A second sequel, co-written by Mindy Kaling, has been announced for release in 2022.

In 2007, this was adapted into Legally Blonde: The Musical on Broadway, starring Laura Bell Bundy as Elle.

Some dude: You read all these tropes?
You (Most likely): What, like it's hard?