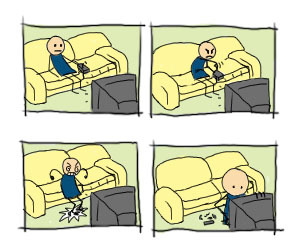 Sometimes characters get angry enough to start abusing things, and if they're hopping mad, start jumping on it. This is a subtrope to Percussive Therapy, where the character is trying to vent their frustrations by destroying something, only punching and kicking aren't enough. The item and the frustrations are sometimes linked, sometimes not. Assuming the character is talking while they're stomping, see Punctuated! For! Emphasis!

Compare: Shoot the Television, That Satisfying "Crunch!", Ring-Ring-CRUNCH!, Appliance Defenestration, and A Glass in the Hand.

Melvin sticks it to the man.

Melvin sticks it to the man.