Series / Are You Being Served? 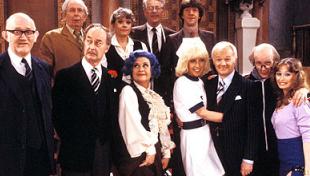 "Mr. Humphries, are you free?"
Advertisement:

Long-running BBC sitcom created by David Croft and Jeremy Lloyd, following the exploits of the employees of the Ladies' and Gentlemen's ready-to-wear departments of Grace Brothers, a London department store, primarily inspired by Simpson's of Piccadilly at which store Lloyd had briefly worked. The show lasted from September 1972 to April 1985, a total of 69 episodes in ten series.

In classic Brit Com tradition, the episodes generally had relatively little in the way of plot. Individual episode storylines were largely a framing device to deliver a rapid-fire series of double entendres, typically dealing with the reactions (or over-reactions) of the staff to the latest management scheme, or tension between the Ladies' and Gentlemen's departments. Almost every episode in later seasons ended with the characters dressing up in silly outfits. The show rarely strayed beyond the department floor, and almost never left the confines of the store itself. A one-off revival with an all new cast was broadcast in August 2016.

The core characters of the show were:

In parody of the British class system, characters are almost never referred to by their first names, and it is several seasons before we even know all of them. (Additionally, several first names change over time; this was even shown with Mr. Lucas's profile picture on one of the discs in the official Region 1 DVD box set, as "Mr. Dick/James Lucas".)

The characters in the show were, in large part, roles rather than people: actors were replaced frequently, each one playing essentially the same role as his predecessor.

Spawned a feature film, an Australian remake, and a short-lived revival, Grace & Favour, which reunited most of the cast as the keepers of a country inn (as the final management scheme before the store went under was to sink their pension fund into it). A number of the show's stars suspect that the viewing public did not realize that Grace & Favour was meant to be a revival, and therefore did not give it a chance. This is somewhat borne out by the fact that the show had more success in the US, where it was aired under the title Are You Being Served? Again!.

U.S. viewers know this show from its near-universal syndication on public television stations. In Mystery Science Theater 3000: Overdrawn at the Memory Bank, while running a fake public TV pledge drive as a moneymaking scam, Pearl Forrester identifies footage of Mike and the Bots as a clip from Are You Being Served?.

"I'm free!"
"And I am unanimous in that!"
Feedback

The staff of the fourth floor at Grace Brothers decide to have Miss Brahms' voice played over closed-circuit television in the store to increase sales. The only drawback is that her voice is considered "dead common".

The staff of the fourth floor at Grace Brothers decide to have Miss Brahms' voice played over closed-circuit television in the store to increase sales. The only drawback is that her voice is considered "dead common".