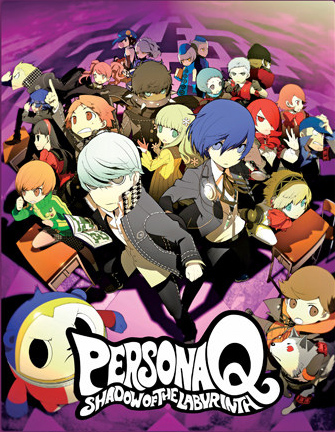 Ain't it great, how we met each other?
Life is but one scene from a play.
We are all nothing more than novice actors
knowing nothing of the script.
The curtains close before the play
is ever performed to its end...
There is no spotlight shining down.
Take off the mask that weighs you down.
All that remains is a dream...
A fleeting dream of the night...
— The Master of the Labyrinth
Advertisement:

Persona Q: Shadow of the Labyrinth is a Nintendo 3DS Spin-Off of, interestingly, two franchises: Atlus' Persona and Etrian Odyssey games. The story is written by members of the Team Persona development group, and features a Crossover between the casts of Persona 3 and Persona 4. But other aspects, such as gameplay and visual design, are taken directly from Etrian Odyssey. In fact, most of the production staff is from the Etrian Odyssey team, including character artist Yuji Himukai.

The story revolves around a mysterious tower that is said to bring death to whoever hears its bell. When the tower appears at both Gekkoukan High School in the past and Yasogami High School in the future, the casts of Persona 3 and Persona 4 team up across time to investigate the tower's labyrinth. Along the way, they meet two brand new characters, Zen and Rei, who are connected to the tower.

A sequel named Persona Q2: New Cinema Labyrinth was announced for November 2018, featuring the Phantom Thieves of Hearts teaming up with SEES (now including the female protagonist from Persona 3 Portable) and the Investigation Team.