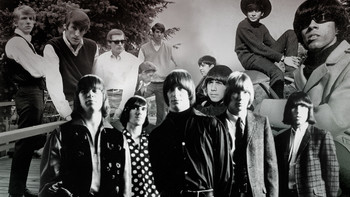 A collage of several original garage rock bands created for a Rolling Stone article. Back left: The Sonics. Front: The Blues Magoos. Back right: Question Mark and the Mysterians.
Primary Stylistic Influences:
Secondary Stylistic Influences:
"They wanted to be The Beatles. They wanted to be the Stones. OK, so a couple of them made it… but what about the rest?"
— Advertising blurb for the Rhino Records Boxed Set Nuggets II: Original Artyfacts from the British Empire and Beyond
Advertisement:

Garage Rock is a raw form of rock music that gets its name from the stereotype of amateur teenage musicians playing in Garage Bands. In reality, while this is how the genre got its start, today many such bands are composed of older and more professional musicians.

The first wave of garage rock lasted from around 1964 to 1968. Perhaps the most influential (and definitely the most frequently covered) garage rock single was "Louie Louie", a tune written by Richard Berry, reintroduced by the Sonics and the Wailers and definitively covered by the Kingsmen in 1963. However, it was The British Invasion that really started the deluge; The Beatles, The Rolling Stones, and all the movement's other groups inspired countless teens from all over the world to form their own bands.

Nearly every early garage band that made a hit was a One-Hit Wonder, although some bands like The Sonics, The Standells, The Seeds, and especially Paul Revere and the Raiders were slightly luckier. (Also, major names like Steve Tyler of Aerosmith, Alice Cooper, Ted Nugent, Iggy Pop, Todd Rundgren, Bob Seger, and Billy Gibbons of ZZ Top got their starts in garage bands.) The double LP Nuggets: Original Artyfacts from the First Psychedelic Era: 1965-1968, compiled by future Patti Smith Group guitarist Lenny Kaye in 1972, contains a decent amount of these hits, as well as some "deep cuts" and even novelty songs from garage and Psychedelic Rock; it was later expanded into a series of CD box sets, and has also inspired countless similar compilations.

There is significant overlap between garage rock, Surf Rock, Folk Rock, The British Invasion, Power Pop, and Proto Punk. Question Mark & the Mysterians, The Monks, and a few later garage rock bands such as The Stooges and MC5 are often considered to be the first Punk Rock bands.

In The '70s and The '80s, punk bands like The Cramps and The Ramones would create the first garage rock revival, while Nirvana and Mudhoney also struck it big with a variant of Grunge heavily influenced by garage rock. But the most successful garage rock bands were formed in the 2000s, when The White Stripes, The Strokes, and The Hives achieved commercial success that was unrivaled by even the first wave of garage rock bands.

The film That Thing You Do! is a tribute to this genre.

Bands from The '70s, The '80s and later who helped revive Garage Rock: