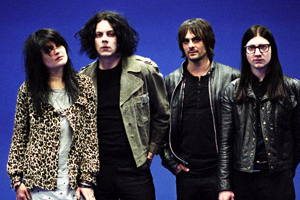 The Dead Weather are an Alternative Rock supergroup composed of:

Another Jack White band, The Dead Weather formed in Nashville, Tennessee in 2009, after Jack White lost his voice in the middle of a Raconteurs concert, and asked Alison Mosshart of The Kills (who were warming up at the time) to fill in on vocals. That night, White met up with Mosshart, Lawrence, and Fertita at a studio, and the quartet performed multiple songs. The Dead Weather have released three albums as of yet.

They have a rather unique style of music, best described as heavily synthesized Garage Rock and Blues Rock with a hint of electro. Interestingly enough, Jack White drums for them rather than playing guitar, as is the norm for him. All of their members are currently working on other projects, but according to Lawrence, the band will be recording or touring by the end of 2011.

In 2013, Jack White confirmed they were recording an album due out in 2015. That December they released a new single, "Rough Detective". The album itself, Dodge and Burn, was released in the September of 2015.

The Dead Weather provide examples of: