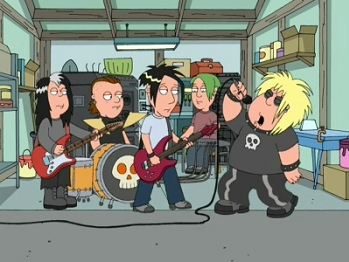 So you want to start a band?

No money? Instruments held together with spit and duct tape? But you're gonna make it big someday, right? You'll need someplace to practice before you play the big stage. If you're from Suburbia do I have news for you! You have the ultimate practice space right in your own home!

Yes, that dinky space where your dad keeps the Christmas decorations on the off season and keeps swearing that one day he'll clean it out so he can actually park his car in there. Co-opt that space now! Kick some stuff out of the way and drop your instruments where you can find space and wail away. You'll be playing concerts in no time, just open the garage door and the neighbors can get in on the action.

This trope is often played in fiction as a ragtag group of teenagers, for bonus points it may be a group of Emo Teens, forming a band. More rarely, it will consist of middle-aged adults; usually this is Played for Laughs, or to show what immature losers they are for doing something usually associated with teenagers or twenty-somethings. Sometimes the band is a spur of the moment thing, started as a weekend project or to win a talent show and becomes the plot of the episode. Often the band will break up at the end of the episode.

Truth in Television, obviously, as it tends to be the largest single room in a typical suburban house that isn't in constant use by the rest of the family. (It also tends to be somewhat soundproof, which is a bonus if you're not very good.) A number of successful bands have started out as Garage Bands, with Nirvana being one of the most famous in recent years. Hell, there's even a genre of music called Garage Rock. Not directly related to the Apple software of the same name, although many garage band members swear by it... if they can afford a MacBook.