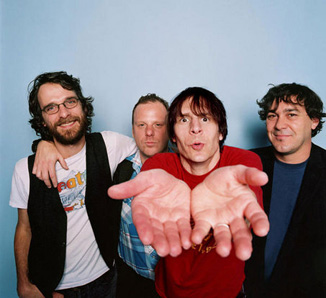 Mudhoney is a Grunge band formed by former Green River frontman Mark Arm. Along with Nirvana, Mudhoney is the main Trope Codifier of Grunge. Despite this they received little popularity or media attention besides their college radio hit "Touch Me I'm Sick". However Mudhoney has a strong grassroots fanbase, and they've even managed to stick around for over three decades without any mainstream success. They continue to perform live, despite the waning of Grunge's popularity.

One of the few cases where the lead singer was both the Trope Maker and the Trope Codifier for the same genre, as Green River was one of the first grunge bands along with the Melvins and Malfunkshun.