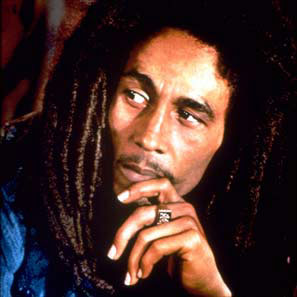 Robert Nesta Marley (February 6, 1945 – May 11, 1981) was a Jamaican musician who popularized reggae as a musical artform and (by association) Rastafari as a religious movement throughout Jamaica and the world at large.

He was the lead singer for the Wailers, a Jamaican reggae and ska group which started in 1963 and lasted until 1974. During that time, Marley recorded many songs, both as a solo artist and in conjunction with the band, and many of those songs were released in the years following his death from cancer in 1981. Among his most well-known hits are "Get Up, Stand Up," "One Love," "I Shot the Sheriff," "Buffalo Soldier," "Redemption Song," "No Woman No Cry," and "Iron Lion Zion."

Among his posthumous achievements: He was inducted into the Rock and Roll Hall of Fame in 1994, awarded the 2001 Grammy Lifetime Achievement Award, and had a statue of his likeness erected at Arthur Wint Drive in Kingston, Jamaica. Additionally, he appears in several works of tourism-related art and across various media, including having an Expy, "Bob, the King of Reggae," in the Twin Of Twins' "Stir It Up" dancehall series.

Marley's most recognizable physical feature is his dreadlocks hairstyle, which has since become synonymous with Jamaican culture and is a favorite hairstyle for several reggae and Jamaican dancehall artists and also generally for both men and women worldwide.