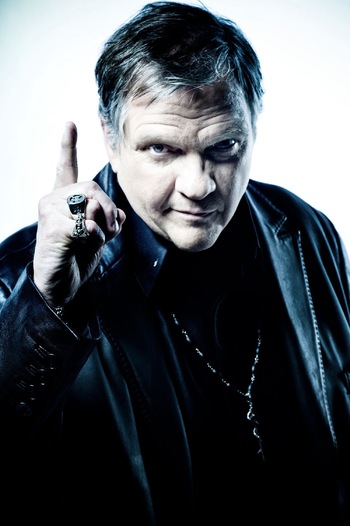 "I was nothing but a lonely All-American boy
Looking out for something to do
And you were nothing but a lonely All-American girl
But you were something like a dream come true
I was a varsity tackle and a hell of a block
And when I played my guitar I made the canyons rock
But every Saturday night I felt the fever grow
All revved up with no place to go."
Advertisement:

Michael (né Marvin) Lee Aday (September 27, 1947 – January 20, 2022), a.k.a. Meat Loaf, was an American singer and actor best known for his hit 1977 album Bat Out of Hell and its two "sequels". With the assistance of songwriter and producer Jim Steinman, Meat Loaf's bombastic, Wagnerian style made a huge splash in the Arena Rock genre and paved the way for many acts to follow.

Born in Texas, Meat Loaf dabbled in musical theatre from an early age. When he received a draft notice in 1967, he tore it up, stole his father's credit card, and moved to California to break into the music industry. In the early '70s he made several forays into stardom — he performed in several small-time bands, released a duets album with Stoney Murphy which largely went under the radar, sang lead on Ted Nugent's Free-for-All album, and performed in touring productions of Hair and The Rocky Horror Show, landing a role in the film version of the latter. His big break was to come while performing in an off-Broadway show called More Than You Deserve, when he befriended its writer Jim Steinman. Steinman had been toying with a sci-fi Rock Opera adaptation of Peter Pan and saw Meat Loaf as ideal for the lead role in it. Though the project, called Neverland, didn't come to fruition until forty years later (in a much altered form, as Bat Out of Hell: The Musical), the songs Steinman wrote for it became the genesis of Bat Out of Hell.

After several years shopping the concept around before getting Todd Rundgren's attention, Bat Out of Hell hit the shelves in 1977. While not immediately a hit, the album grew with popularity over time. It spent 485 weeks on the charts in Britain (second only to Fleetwood Mac's Rumours at 522 weeks), is presently the #5 best-selling album ever released with more than 43 million copies sold worldwide (14 million in the United States alone), and still sells about 200,000 copies per year. A "sequel" album, Bat Out of Hell II: Back into Hell, was released in 1993 with new songs by Steinman, including his only U.S. #1 single, "I'd Do Anything For Love (But I Won't Do That)". A third in the series, Bat Out of Hell III: The Monster is Loose, was released in 2006 featuring songs written by him and by Bon Jovi lyricist Desmond Child. This was the first Bat album not produced and written solely by Steinman, although several older songs written or recorded by Steinman beforehand are featured. In addition to the Bat Out of Hell trilogy, Meat Loaf released several other albums, with varying levels of involvement on Steinman's part.

Unfortunately Meat Loaf suffered a complete loss of his voice in 2016 and struggled to perform live since then, heavily relying on backing tracks. In 2018 it was announced that on his next tour he would not actually be singing at all, handing off vocal duties to 2014 American Idol winner Caleb Johnson while Meat Loaf would act as host and storyteller during the shows.

He died on January 20, 2022 at the age of 74. His death came nine months after Steinman's death on April 19, 2021. He had recently stated that he and his band were preparing to get back together to record another album, but he died before any recording could happen.