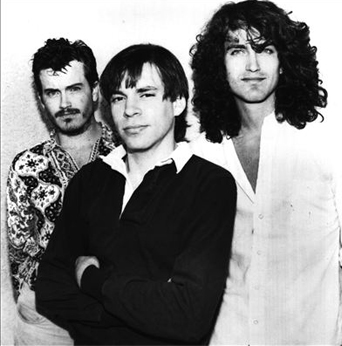 Describe Meat Puppets here. Okay then, if you insist. This may be a little complicated though...

The Meat Puppets are an Alternative Rock and Cowpunk (a hybrid of Punk Rock and Country Music, for those who couldn't guess from the name) band from Phoenix, Arizona who formed in The '80s. First formed as a Hardcore Punk band in 1980 by the Kirkwood brothers (Curt and Cris, on guitar and bass, respectively) and drummer Derrick Bostrom (this being regarded as the "classic" lineup), they were noticed by and quickly signed to the famed SST label, founded by Black Flag guitarist Gregg Ginn (and home to Black Flag, Dinosaur Jr., Hüsker Dü, Saint Vitus and numerous other well regarded Alternative Rock bands from the era). Their first EP and album were pretty typical (if somewhat noisier and less structured than usual) hardcore stuff and kinda unrepresentative of the sound they'd become known for.

Sick of the loud fast rules of Hardcore Punk, they changed up their sound SIGNIFICANTLY for their next album, Meat Puppets II. Now heralded as a classic, the record was well-received and set the tone for all their later albums. Throughout the rest of the decade, they released a string of records on SST that played with (but never completely abandoned) the sound they hit upon on II, while also streamlining their production and either hardening (Out My Way, Huevos, Monsters) or softening (Up On the Sun, Mirage) their overall sound. In 1989, after releasing Monsters, they briefly broke up, but they re-formed in 1991 and signed to major label subsidiary London Records.

They achieved their highest level of commercial success in 1994, with the release of Too High To Die, which contained the minor hit "Backwater". The biggest factor in their sudden (relative) success was Kurt Cobain choosing to cover "Plateau", "Oh Me" and "Lake of Fire" (all from Meat Puppets II) in Nirvana's MTV Unplugged in New York performance. This success didn't last though- The follow-up, No Joke!, didn't sell nearly as well. The band's increased use of hard drugs and the failure of the album resulted in the band breaking up shortly afterwards.

The band reformed in 1999, with a new lineup composed of Curt, Kyle Ellison, Andrew Duplantis, and Shandon Sahm (incidentally, the son of Doug Sahm, the legendary Tex Mex fiddler/singer and leader of The Sir Douglas Quartet and Texas Tornados). This lineup relased Golden Lies in 2000 before breaking up again in 2002. In 2003 Cris was arrested for attacking a security guard with OWN baton. He went to prison for two years before being released. It looked like things were over for good after this...

In 2006, however, Curt asked fans on the band's MySpace page if they were interested in having the classic lineup reform. The response was overwhelmingly positive, and rumors spread. The band proceeded to do just that, though original drummer Bostrom dropped out and his spot was filled by Ted Marcus. They released Rise To Your Knees in 2007. They have released three more albums since then, with the most recent being Rat Farm in 2013. As of 2009, Shandon Sahm is back as the drummer. In 2011, Curt's son Elmo joined the band as a rhythm guitarist on their tours.

Tropes that apply to The Meat Puppets: