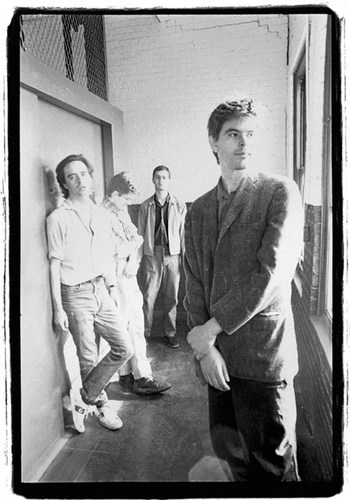 Mission of Burma were a seminal American Post-Punk rock band from Boston, consisting of Roger Miller on guitar, Clint Conley on bass, Peter Prescott on drums, all three of whom shared vocals and songwriting duties. Their original lineup also included sound engineer Martin Swope, whose experimental uses of tape-loop sound processing were partly responsible for their distinctive sound; when the band reunited, Swope did not return and was replaced by Bob Weston. They were named for a sign on a diplomatic building.
Advertisement:

The band formed in 1979 and released one standalone single, "Academy Fight Song" b/w "Max Ernst", one EP, Signals, Calls, and Marches, and one full-length LP, Vs., before disbanding in 1983. Afterwards they released a live album called The Horrible Truth About Burma and two demo compilations Forget and Mission Of Burma (aka Peking Spring) Unlike many bands, however, they did not "break up" due to personal or artistic differences, but primarily due to Miller suffering from severe tinnitus, which had been exacerbated by their notoriously loud and unpredictable shows.

During their nineteen-year absence as a band, their reputation and influence as Alternative Rock pioneers grew, heightened by their very small recorded output, popular covers, and rock histories such as the book Our Band Could Be Your Life.

Then in 2002, they reunited, with Weston replacing Swope on the boards. Again, they refused to follow the usual script for reunited bands: rather than just playing nostalgia tours, they started recording again. In 2004, they released a second album, ONoffON, followed by more.

More pointedly, their new records were as well-received and just flat out as good (if not better!) than their old material, and they kept putting out new music until 2012. They announced their permanent disbandment in 2020.

Albums by Mission of Burma

Tropes used by or describing Mission of Burma include: