Video Game / Limbo of the Lost 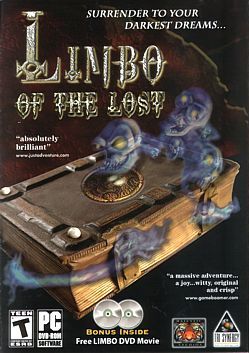 Limbo of the Lost is a horror Adventure Game in which you control Captain Benjamin Spooner Briggs, captain of the Mary Celeste (as he will let no one forget). Briggs wakes up in a cell with an extremely flexible, spider-like man named Arach, who unlocks the door and lets him into the dungeons of an ogre named Grunger. Briggs eventually finds that he is in Limbo, and attempts to escape, with the help of his "Earthly Guide"; that'd be you.

But that's not what the game is famous for...

For one, the game is an "asset flip" almost a decade before Jim Sterling coined the term; pretty much every background is shamelessly ripped from another game, without so much as a mention or acknowledgment to be found - not even in the credits. Secondly, the items you need to pick up are often dark in color and hard to make out against the usually-dark backdrops, making progress a chore (in one instance, an item is partially obscured by your compass, which can't be taken off of the screen). Third, the game's animation, CGI and otherwise, would look primitive in the late 1980s (the game, by the way, was released in 2008). Fourth, there's the "Join us... Join us... Join us now!" whisper that plays in the background every time the game is loadednote Which, considering the game's habit of randomly crashing on Windows 10, means you'll probably hear it a lot., shamefully ripped from the Thief series.

Due to its absolutely massive amount of plagiarism, the game was pulled off store shelves. An alternative is to read the excellent Let's Play from the Something Awful forums by The Dark Id: it does an excellent job pointing out each and every insult to your intelligence without forcing you to actually play it

. There is also another Let's Play by Wields-Rulebook-Heavily

which also does a good job at covering the game. For those who would prefer a video playthrough, Vinny of Vinesauce has livestreamed

the game in its entirety; the stream is preserved here

Even in light of all these facts, it is not immune

to The Wiki Rule (the wiki just notes what is stolen).

And whatever you do, do not confuse it with Limbo, which is like the exact opposite of "bad" by many people's standards.