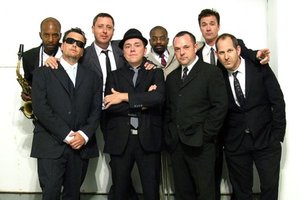 An American Ska band active from 1983 to 2022 and one of the main groups involved in the ska punk genre, the Mighty Mighty Bosstones were recognized mainly for their fusion of ska and Hardcore Punk and the distinctive growling vocals of frontman Dicky Barrett. They became prominent in The '90s during the height of the Third Wave ska revival and had a very successful hit with "The Impression That I Get", which topped the modern rock charts in 1997, and the platinum album Let's Face It. After going on hiatus for several years in The Noughties, they reformed in 2009 to release a new record, Pin Points and Gin Joints.