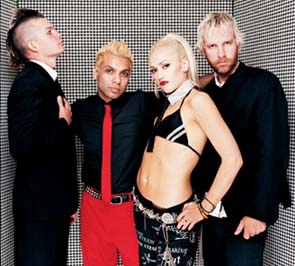 The band started out of Anaheim, California, and became a hit with the release of the singles "Just A Girl" and "Don't Speak" and the release of the Tragic Kingdom album, which was highly influenced by the relationship between Gwen Stefani and Tony Kanal. After 2004 the band took a hiatus for Gwen to work on her solo career. They returned with a 2009 summer tour, and released a new album in 2012.

Gwen Stefani may be a vampire.

No Doubt's music provides examples of: