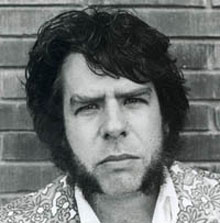 Mojo Nixon (born Neill Kirby McMillan, Jr., August 2, 1957) is an American psychobilly musician, probably best known for his irreverent and comedic Take That! songs about celebrities which earned him acclaim in the 1980s college rock scene and MTV, being namedropped in The Dead Milkmen's hit "Punk Rock Girl"...and for playing Toad in the Super Mario Bros. movie.

Tropes that apply to Mojo Nixon: