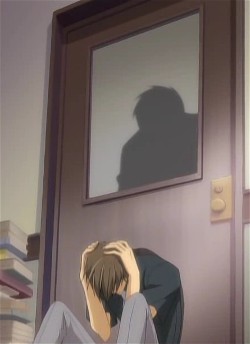 "Please, I know you're in there
People are asking where you've been
They say, "have courage" and I'm trying to
I'm right out here for you
Just let me in
We only have each other
It's just you and me
What are we gonna do?"
— Anna, Frozen
Advertisement:

In fiction, one great way to up either the drama or comedy of a conversation is to have it occur through a door. One party shuts the other out in an attempt to avoid the confrontation while the other desperately tries to communicate in spite of the obstructive barrier.

This setup is useful in providing physical distance between characters to mirror psychological separation, and for its flexibility in resolution. This distance may just as easily be broken down by the opening of the door as suspended indefinitely by the character choosing not to emerge. Usually, the character behind the door is the more emotionally closeted of the pair while the character on the outside is more honest and straightforward, having to persuade the other that opening the door is not a bad thing.

Most commonly portrayed with romantic relationships and between parents and children who don't see eye-to-eye. Occasionally accompanied by the stock phrase "let me in," providing a deliberate ambiguity between "let me into the room" and "take me into your confidence."

Sister Trope to Separated by the Wall. If it's a washroom door that the characters are speaking through, see Locked in the Bathroom.

Alternative Title(s): Discussion Through The Door