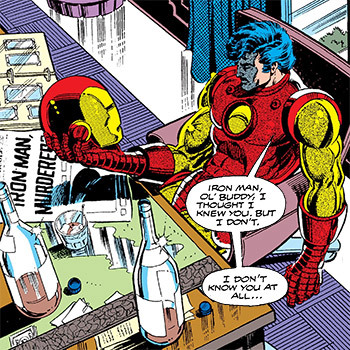 "All it comes down to is this: I feel like shit but look great."
— Patrick Bateman, American Psycho
Advertisement:

He's tall, charming, strikingly good-looking, well-spoken in five languages, and classically trained in even more instruments. He's the Big Man on Campus, former president of the Absurdly Powerful Student Council, valedictorian, and working on his doctorate in a scientific field that a peon like you can't even pronounce. He always wears a suit...until the inevitable Shirtless Scene during his (strenuous) exercise routine, that is. He has a lovely smile.

But inside, he's an ugly, writhing mass of self-hatred, Parental Issues, past tragedy and whatever unpleasentries that was brought upon him.

Expect him to have at least one bizarre trait or ability that should not be overlooked, as well as an unhealthy attitude about love, life, and humanity in general. He most likely doesn't have anyone that loves or respects him for what he really is. This may be justified.

In the most cynical works on the sliding scale, he'll be a Serial Killer, or at least a future one. In works on the more idealistic end, he'll be struggling with a mental illness, a disorder, or some other demon that makes his life miserable but isn't his fault.

This character is usually male (female characters tend to be Broken Birds instead), but not always. Also, he may just be a perfectionist crumbling under his own standards. The chief difference between the Broken Ace and the usually female Stepford Smiler is that the Stepford Smiler wants to appear normal at all costs, often to the point of hurting herself emotionally (or because she's sociopathic). This guy has the same setup, but is more talented and wants to be the best, loved by all, and accepted. The debilitating personal issues which he's hiding are only getting worse because of being repressed and the stress of his efforts to excel, and these sorts of characters are prime Jerkass Woobie material.

See also The Ace, who's still better than you at everything but isn't so prone to mental disorders or emotional problems, and the Byronic Hero, who's just as awe-inspiring and brooding but lacks the charming, polished façade and is rarely presented as pathetic. For plots where a character's idol is revealed to be this, see Broken Pedestal. Anyone who has experienced The Perils of Being the Best is likely to become this. Related to "Well Done, Son!" Guy if the child has accomplished much and gained much respect from other people. In case you haven't noticed, this has nothing to do with Asexuality.

In Real Life, this is rather common. Real people have flaws no matter how perfect they seem to be at first glance.