Comic Book / The Transformers: Last Stand of the Wreckers 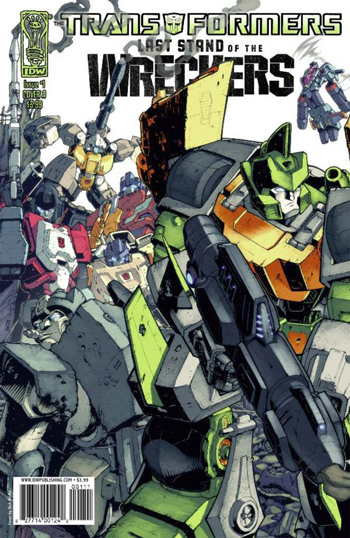 Too Cool to Live: The Miniseries.
"Welcome to the team. Just be prepared: sometimes in the Wreckers, your first day is your last."
— Springer
Advertisement:

A 2010 Transformers mini-series from IDW Publishing, following the adventures of a Ragtag Bunch Of Misfit Autobots who join the Autobots' elite suicide squad, the Wreckers. The veteran Wreckers and the recruits try to liberate an Autobot prison facility from the rogue Decepticon Overlord.

The series quickly became a fan-favorite among die-hard Transformers fans due to its colorful cast of previously unused characters, straying from the main series' strict use of "classic" Generation 1 characters. It helps that the series was written by James Roberts and Nick Roche, a pair of well-liked Promoted Fanboys.

See also The Transformers: More Than Meets the Eye, which is also written by Roberts. It's set in the same universe and continues many of the themes and plot points of this story.

The 2015 sequel, Sins of the Wreckers, picks up a couple of years after Last Stand, showing the fates of the surviving Wreckers.

open/close all folders
A-M
N-Z
Advertisement:
Wreck 'n' Rule!
You see, this is one of those stories with a moral.
And the moral is simply this: Life Persists.