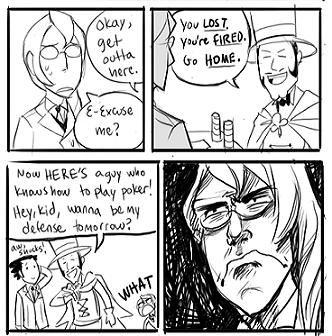 He looks upset.
"His resentment boiled up behind his eyes like sinus pain. All this bloody hero worship, or whatever it was. All for Naismith. For Naismith, and not for me... never for me..."
— Mark Pierre Vorkosigan, Mirror Dance
Advertisement:

So you have got your hero. The Call to Adventure has found them. By birth, supernatural aid, or just plain luck, he is the Only One to be granted everything needed to save the world: Cursed with Awesome powers, a suit of Plot Armor in their exact size, the plucky supporting cast. He has basically caught the Hero Ball and is running with it as far as he can, but hiding in the shadows, there is someone with a problem. He might be the villain of the piece, but he is just as likely to be working on the same side as the heroes. Really, this is something that goes deeper than good and evil, love and hate.

Maybe he is the Determinator, sick of seeing fate grant the hero the world on a silver platter when he himself has spent his whole life trying to achieve it. Maybe he is the Butt-Monkey, and he has had enough of it. Maybe he is The Smart Guy, sick of seeing the Idiot Hero be more successful than him despite numerous Too Dumb to Live moments. Maybe he is the Internal Affairs guy, hating how the Cowboy Cop gets away with breaking the rules time and time again. Maybe he discovered, after striving to his utmost to win a competition, that it had been a Secret Test of Character and his effort had only ensured his loss. Maybe he was Refused by the Call after all his effort.

In any case, there is one thing they certainly agree on: Whoever it is that chooses The Chosen One has clearly chosen the wrong one. The grapes are just out of reach, and that makes them all the more sour. This trope makes for prime Motive Rant bait as, if the resentful one makes a full Face–Heel Turn because of it, expect them to go down screaming about how unfair things are and how much better everything would have been if things had gone the "right" way.

One of the key traits of many a Beta Test Baddie. If the resentment is seen as truly justified, the character has been made Unintentionally Sympathetic.

Compare The Rival and Rival Turned Evil. If the resentment is over a girl, see Two Guys and a Girl.

May turn into an Arch-Nemesis, unless of course the hero doesn't notice. Which is likely to piss them off even more. Or they may redeem themselves somehow, which is odd if you think about it.