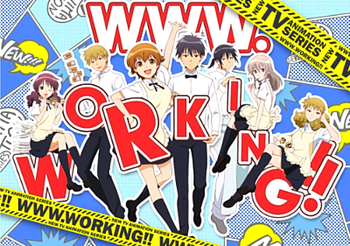 WWW.Working!! (WEB版WORKING/Web-Ban Working!!) is the title of the print release of a 4-panel Work Com Webcomic by Karino Takatsu, set in a certain city in Hokkaido in a branch of the family restaurant chain Wagnaria. It started in 2002, titled just Working!!, before its print cousin, but its chapters were only compiled in print form from 2015 to 2017.

An anime adaptation aired during the Fall 2016 Anime season, though the series itself was a favorite subject for April Fools jokes ever since its spinoff's anime started.

Daisuke Higashida's family life has run into a bit of a snag. A straight-laced student with good grades and attending a good high school, his world is turned upside down when his father is suddenly laid off. Now forced to look for some part-time work to be able to maintain a semblance of a regular high school life, he lands a job at a nearby family restaurant. There he's forced to very quickly adapt to the very quirky personalities of his new co-workers, at the same time keep family-related stress from driving him insane.