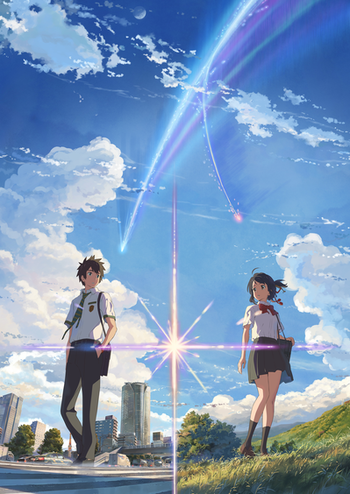 Your Name (Kimi no Na wa) is the sixth film by Makoto Shinkai. The film was animated by CoMix Wave Films and distributed by Toho. The film premiered at Anime Expo on July 3, 2016, and opened in Japan on August 26, 2016. Shinkai published a novelization a month prior to the film's theatrical premiere.

Your Name follows the lives of two high school students, Mitsuha Miyamizu and Taki Tachibana. Rural-bred Mitsuha has long been dissatisfied with her life in the countryside and resents her role as a Miko, as well as the way her father focused on his political career instead of caring for his children.

Her wish of being reborn as a handsome Tokyo boy is seemingly granted when she wakes up in Tokyo and is treated to a day in the life of a busy Tokyo high school student, adjusting to the hustle and bustle of the city that stands in stark contrast to the sleepy town of Itomori. While she dismisses her experiences as a dream, the phenomenon, seemingly related to the appearance of Comet Tiamat, begins to occur with increasing frequency, bringing Taki and Mitsuha together in a way they previously thought unimaginable.

An American Live-Action Adaptation of Your Name is in development.

Your Name provides examples of: