I'm Crying, but I Don't Know Why 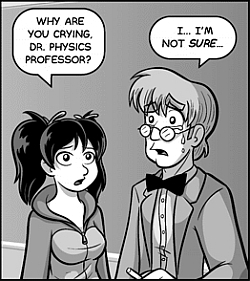 "...I think it might have something to do with the phrase 'solid fire that doesn't burn'"

A character spontaneously starts crying, seemingly for no reason. When asked about it, even they don't know why they're doing it. There is inevitably a plot-relevant reason behind this.
Advertisement:

Perhaps it's a repressed memory that has just been triggered, or maybe something bad has happened somewhere else and their Spider-Sense is tingling. Whatever the reason, it's usually because their subconscious knows something that the conscious mind doesn't.

It is particularly likely to happen if the character is The Empath or has a Psychic Link to someone else. Another common variant involves a loved one that was somehow erased from existence.

For the nasal equivalent, see Sneeze Cut. Sub-Trope of My Significance Sense Is Tingling.

For characters who are just confused because they didn't know they were capable of crying, see My Eyes Are Leaking and What Is This Feeling?.

Can be Truth in Television. The subconscious can react to things the conscious mind doesn't fully register; for instance, smelling the not-quite-identifiable traces of a perfume worn by a beloved late grandmother. Crying is also a common reaction to being overwhelmed by emotion; such emotional turmoil can be both physically and emotionally painful, and difficult for the conscious mind to completely sort out, leading to things like Cry Laughing and Berserker Tears as one slowly figures out everything one is actually feeling.

Axel is overwhelmed with emotion when Kairi reminds him of Xion. Because Xion's death led to all memory of her vanishing with her, he cannot properly explain why.

Axel is overwhelmed with emotion when Kairi reminds him of Xion. Because Xion's death led to all memory of her vanishing with her, he cannot properly explain why.