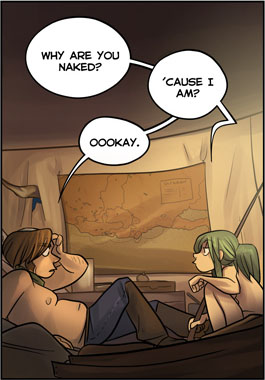 Makes sense to me.
"What I want to know is what is so wrong with my body that nobody wants to see it?!"
— Grace, El Goonish Shive
Advertisement:

A character (usually female) with No Nudity Taboo, who doesn't understand the concept that not wearing clothes is considered indecent. This can be justified any number of ways, but nine times out of ten, it's really for fanservice.

A very common subtype is the creature that is ostensibly inhuman enough to supposedly not need clothing, like the Zora of the Zelda games, Exposed Extraterrestrials, certain furries or weres (with or without Non-Mammal Mammaries), or of course, practically any kind of pixie. This subtype is so overwhelmingly commonplace with these inhuman characters that it usually does not come into play at all, making it an Averted Trope.