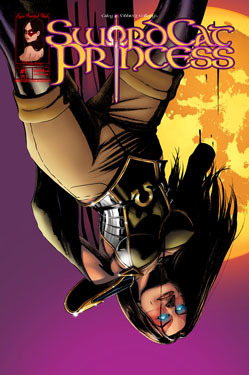 (formerly Eternal Knights) is a comic book series created, written, and illustrated by Caley Tibbittz Collopy. It is published online under the independent banner Eyes Painted Red Productions as a webcomic on Comic Fury.

SwordCat Princess stars suicidal immortal superheroine Kathryn "Artemis" Kennedy, who is haunted by a millennium of death and her failure to save her lover, family, and friends. In new friend NYPD Detective Erica Richards and new squire Julia (a faerie princess beginning a new life as a human), Kathryn again finds reasons to live... just as she finally finds a way to die.

Antagonists in the first story arc include Officer Jack Dawson (who blames Kathryn for his father's murder), Jonathan MacKnight (a billionaire who is dying of cancer and seeks to steal Kathryn's immortality), and Lord Oberon of Avalon (an incredibly powerful faerie king who seeks to control Kathryn's fate).

In addition to a focus on action, superhero adventure, and (often bawdy) humor, SwordCat Princess deals with serious themes of seeking purpose in life, suicide and suicidal thoughts and depression, seeking friendship and "found family". It features both heterosexual and homosexual (gay, lesbian, bisexual, LGBT) romantic elements. The Kathryn/Erica pairing may be described as a lesbian superhero romance, and is a major element of overarching plot.

The action and superhero stories are heavily character-driven, with interpersonal relationships between the characters general taking precedence over the procedural aspects.

(The comic is intended for mature readers; some pages are NSFW and feature nudity, sexual situations, expletives, and graphic violence.)