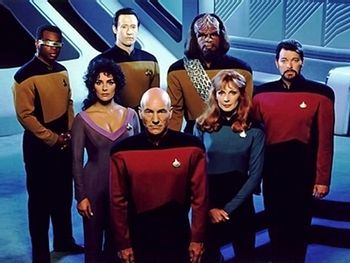 Look at the chick in purple, then look at the rest. Notice anything?note At least in this case, it does serve the characterization. Troi isn't a standard crewmember, she's the equivalent of a chaplain/therapist. Getting people to relax and talk about intimate subjects with her is part of her job, so it stands to reason the uniform rules might be different for her position.
"Operative Lawson's uniform is very official. It always makes me stand at attention."
— Donnelly, Mass Effect 2
Advertisement:

This is where the most beautiful member of a group — who just so happens to be Always Female — wears a more revealing version of the standard uniform in order to ramp up the fanservice. This very often has little to do with the plot; the artist or costume designer is simply having fun dressing up the sexy one. This often applies to The Chick or The Vamp, even if other female characters in the group wear more standard clothing. If there's a Tomboy and Girly Girl dynamic in place, this serves as a fairly obvious visual cue. In extreme cases, this can get into what is usually Sexy Whatever Outfit territory.

A Sub-Trope of Rule of Sexy.

Despite this trope's name, it is more likely to be a Non-Uniform Uniform than a flat-out Custom Uniform, meaning it will still have elements of the standard outfit while showing more skin.