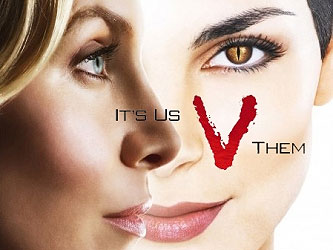 "We are of peace, always."
Advertisement:

A remake of the original series, airing on ABC. Massive spaceships appear over many of the major cities of Earth, and simultaneously broadcasted images of "Anna", the leader of the Visitors. She claims that her own species is 'delighted' to find another intelligent species and want to trade their own technology for water and a "common mineral".

Mankind is eager to embrace the help offered by the "Vs", especially their clean energy and universal health care. A handful, however, are aware that the Vs are not as benevolent as they claim, and that lurking under their beauty is an ugly intention.

Erica Evans is an FBI agent who is tracking multiple terrorist cells. Upon the arrival of the Vs, she notices that one cell's activity suddenly spikes, and her investigation leads her to a man who claims the Vs are here not as friends, but as conquerors. Through this meeting and the events that follow, she meets both Jack Landry, a Catholic priest who is questioning the effects of the Vs, and Ryan, a member of the half-legendary Fifth Column.

Stars Elizabeth Mitchell as Erica Evans and has Morena Baccarin as Anna, in a role equivalent to Diana's in the original.

ABC cancelled it after the second season.