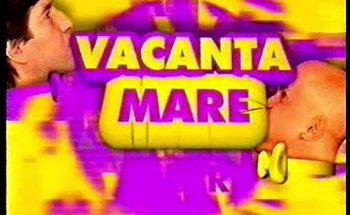 After the death of Dan Sava in 1999, Vacanța Mare got a Monty Python like show on the Romanian tv channel PRO Tv. The show was originally aired in prime time and lasted an hour. After the rival TV Channel, Antena 1 tried to compete with PRO Tv trough the Divertis show, the show was moved to air every Sunday at 8PM. The show went under different formats and featured various segments. Such as:

The second half of the show would be reserved to Leana&Costel. A sitcom adapted from the characters played on stage. The show will also feature other characters from the stage such as Garcea the cop, Crapu the Gypsy thief (with another partner called Zorro (played by Radu Pietreanu) and sometimes a gypsy named Pardalian (played by Florin Petrescu)).

In 1999 the show originally had a segment called "Pastila Timpului"( the time pill) as the second half. This was a sitcom about a scientist named Professor Hărăbor(played by Mugur Mihăescu) who invented a pill which allows him to travel trough time. Along side him was also his wife (played by Mirela Stoian), Their son Sorinel (played by Florin Petrescu), His Father (played by Radu Pietreanu) and his Assistant (played by Emil Rădinoiu) and another one called "Boier Moflea&Vodă". Another sitcom, this one was of course about a Boyar (Eastern European nobility) named Moflea and a ruler simply known as "Vodă" (title given to rulers of Wallachia and Moldavia). The 2 will always be at odds with one another with Moflea often pranking Vodă or conspiring to overthrow him and take his throne.

Other characters that appeared in the show are Gheorghe (a peasant who often comes to ask Vodă for various things) and Vodă's wife.The Pro Tv show lasted from 1999 to 2007 and from then on, they left PRO Tv and moved to Kanal D (the Romanian version of the Turkish channel with the same name) where they made various other shows. Almost always whom were exclusively about Leana and Costel (except Vacanța Mare Realoded which was a talk show hosted by Mirela Stoian who also featured various sketches).