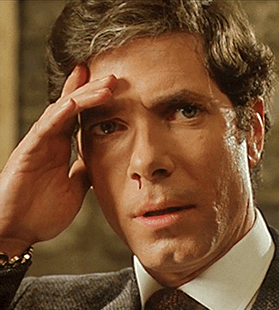 Cameron Vale ponders and bleeds.
"I, I must remind you that the, uh, scanning experience is usually a painful one, sometimes resulting in nosebleeds, earaches, stomach cramps, nausea."
— A very unfortunate man, Scanners
Advertisement:

Purely mental battles are hard to show with special effects. Sure, you can have the characters sweat, strain, or show veins swelling on their forehead. But when a character with Telepathy or other Psychic Powers pushes them to the limit, or when a character is under mental attack, or on the losing end of a duel with another psychic, nothing quite exemplifies the true state of affairs like a thin trickle of blood oozing from their nose.

Exactly how much damage this implies varies from place to place. Exaggerated versions of this include blood from the eyes, or eyes and nose simultaneously. Within nodding distance of Truth in Television, as rupture of the capillaries inside the nasal membranes is a recognized (albeit rare, and usually only seen in people already in poor health) symptom of dangerously high blood pressure, such as that caused by extreme emotional stress, physical strain, or — presumably — intense psychic effort. Sudden nosebleeds under stress have been known to precede strokes.

An early example of the trope was the film adaptation of Stephen King's Firestarter, where it was used in place of the original book's far-less-visible "tiny cerebral hemorrhages". However the first

actual depiction can be found in the film Scanners (pictured above), which came out a few years prior.

Bleeding from the eyes or ears instead of or alongside a nosebleed could be considered variations of this trope. Blood from the ears in particular is a more worrying sight than a nosebleed, because it's a highly recognisable sign of head trauma.

which the author has dubbed "epistaxis telepathica."

Sometimes overlaps with Deadly Nosebleed and may lead to Power-Strain Blackout if the psychic battle drags on for too long, or if the psychic pushes themselves to exertion. Only occasionally related to Blood from the Mouth.

For nasal hemorrhages that are more of sexual than psychic nature, see Nosebleed. And for a psychic trope that may result in such, see Dirty Mind-Reading.

Gillian is unfamiliar with her psychic powers which causes people who touch her, bleed.

Gillian is unfamiliar with her psychic powers which causes people who touch her, bleed.