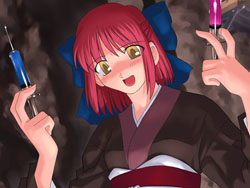 It's needle time!
V: What they did to me was monstrous.
Evey: And so they created a monster.
— V for Vendetta
Advertisement:

A Mad Scientist, Mad Doctor, or Evilutionary Biologist, possibly supported by The Syndicate and/or The Government, will run a series of classified experiments to create something — often without regard to the well-being of the often-living test subjects, and the words "moral", "ethical", or "safe" will not be in the head scientist's vocabulary. These experiments are often done to Disposable Vagrants and Condemned Contestants who are Strapped to an Operating Table, but occasionally you'll see a Professor Guinea Pig who uses himself and/or his family as the test subject(s).

Super Soldiers and Super Serums are usually the goal of these experiments, but Mix-and-Match Critters, Bioweapon Beasts, Custom Built Hosts, Genetic Abominations, Phlebotinum Rebels, Psycho Serums, and Secret Project Refugee Families are often the result. They often become Disposable Superhero Makers with No Plans, No Prototype, No Backup, and have a great risk of With Great Power Comes Great Insanity or Power Degeneration. Expect a plot to spring up with one of these victims having Escaped from the Lab.

See also They Would Cut You Up, for when people with superhuman powers live under the threat of having this happen to them. When animals are involved, this may be combined with Pounds Are Animal Prisons or Animal Testing.

May overlap with Eye Scream and Cold-Blooded Torture.

A Super Breeding Program tends to be this on a grander scale.

A literal version may involve a Giant Medical Syringe.