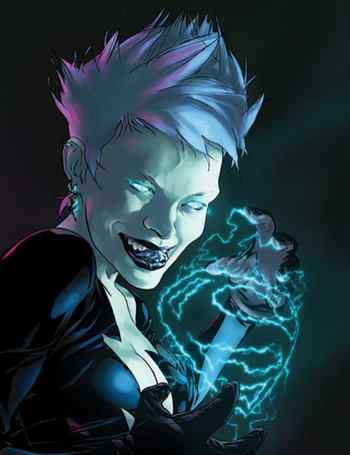 From Shock Jock to just shocking.
"When your hair stands on end, you are already dead."
— Heroes of Might and Magic IV, flavor text for the spell "Chain Lightning"
Advertisement:

Lightning. An incredibly powerful force of nature that has awed mankind since before the beginning of civilization.

Today we know this to be an atmospheric discharge of electricity, but to the people of the past, this phenomenon was an Act of God and a symbol of great power. So characters who happen to wield the power of this electric element can be very powerful indeed... and you know what they say about those with great power. No, not those ones.

A subtrope of Personality Powers, but one you have to do a bit of digging to make sense of. Lightning and Electricity related characters tend to be psychotic, sadistic, and/or just plain insane. Whether this is in a touchy and paranoid way or in a cold, unhinged manner is up to the writer, but mostly, they're marinated in A-1 crazy sauce.

Lightning is not associated with madness in folklore or mythology, where it's treated as a regal and divine ability. In High Fantasy, this power is attributed to knightly and chivalrous people. But when it comes to modern Speculative Fiction and especially Super Hero fiction, characters with lightning powers are just plain nuts or incredibly sadistic, almost guaranteed to take delight in giving their victims some Electric Torture.

Perhaps it's because of the seeming disorder of thunderstorms. The songs of chaos sung by thunder and lightning, the loud, scary, booming sounds, the darkness that entails and the jagged appearance of lightning itself can make for decent symbols of madness. Maybe it has to do with the idea that the brain is controlled by electrical impulses, and the electrical current running through them messes with their mind. Cue the electroshock therapy

, which in this case just makes things worse.

It may have nothing to do with lightning and all to do with electricity. Man-made electricity has allowed us to see it up close and witness its erratic patterns and behavior. Many associate electricity with pain and with good reason, thanks to the electric chair and the fact that electrocution (electrocution is electrical and execution) isn't a fun time for anyone. Whatever the reason, The Psycho Electro remains prominent in fiction. When it comes to crazy sadists with powers, nothing really expresses it better than the twitchy, destructive and unpredictable nature of lightning and electricity.

Or it could possibly relate the shocking sensation of electricity that would cause a person to twitch and how the typical psychotic person twitches. It's then just A+B=C+B=D.

Despite this, it is not a case of Bad Powers, Bad People. There are still many heroes and good characters that have lightning abilities. It seems to be one of those "double-edged sword" powers where it can help people just as much as it can harm them, but the great potential for destruction is still there and may serve to enforce how careful they need to be.

The moral- and personality-neutral trope is Shock and Awe. Contrast An Ice Person and Playing with Fire, the other two elements that form the Fire, Ice, Lightning trio.

open/close all folders
Anime and Manga
Comedy
Comic Books
Fan Works
Film
Literature
Live-Action TV
Tabletop Games
Video Games
Webcomics
Web Original
Western Animation
Real Life
These people have gone ec-static with the powers they've conducted, aren't exactly grounded and may get a jolt out of doing revolting things, whether it hertz others or not. Indeed, sometimes they Jump Off the Slippery Slope for a simple surge of enjoyment, and as such should never be left in charge. Notably, most of them go with the current, do watt they do best and sometimes, with a shocking past from their childhood's ohms as the driving spark, they run down the wire and pull the plug on a few puppies. Suffuse to say, their power has corrupted them and is reason enough to have them put in the chair.
Feedback

Electro is a deranged super-criminal with electric powers that has dreams of becoming an energy being.

Electro is a deranged super-criminal with electric powers that has dreams of becoming an energy being.